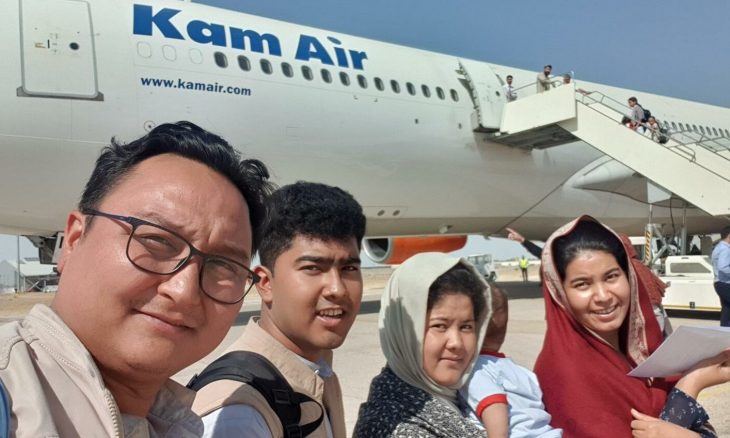 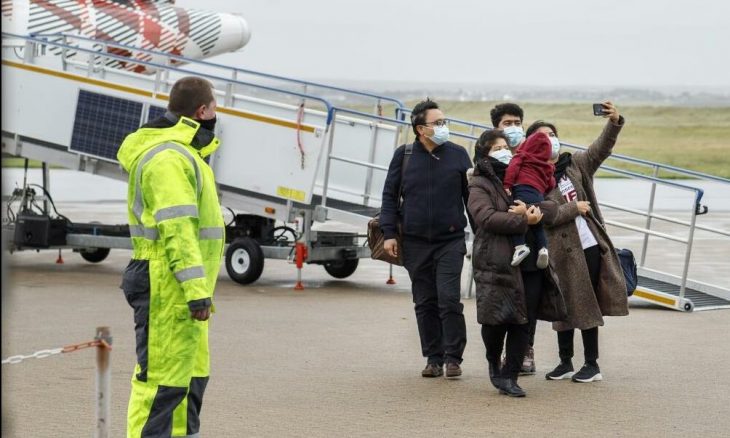 We’re delighted and relieved that Frishta and Farzana, our staff in Kabul, have managed to leave Afghanistan with their immediate family.

Frishta, her husband Murtaza, their 11-month-old baby Kia, Farzana and their brother Zaker initially flew to Qatar, before arriving in Scotland earlier this month. Their flight was organised by US charity Uplift Afghanistan Fund, and they were supported by British Embassy staff in Qatar.

The volatile situation around Kabul airport prevented the family from making it to a flight in August, despite spending a relentless 46 hours around the airport.

The family went through a harrowing experience in their attempts to evacuate from Kabul and then when they were in hiding while hoping to get a flight from Mazar-i-Sharif.

Attempt to leave from Kabul

The family endured a terrifying ordeal and witnessed a man being shot in front of them as they were caught up in the frantic scenes at Kabul Airport in August, at times waiting on a bus, at others trying to get through crowds at the gate.

They were bussed to Kabul Airport the day after a suicide bombing killed 13 American troops and at least 169 civilians. The family feared for their lives amid suggestions ISIS-K bombers were planning a follow-up attack.

Frishta tells their story: “Everyone was scared there would be more attacks – but we had no choice.

“The closer you got to the airport, you could hear the gunfire getting louder and louder. We’d heard sporadic firing in the street, but this was non-stop. We spent two days and two nights at the airport and all you could hear was constant gunfire.

“That whole night, I tried to put my hands over Kia’s ears to stop him hearing the noise of shooting and people crying and shouting.

“The army was shooting in front of people’s feet to try and scare the big crowds away from the gate, but they were not deterred. We saw this one person get closer and closer until they shot him and he fell dead in the street.

We thought there was about to be another big explosion and that would be our last moment alive.

“Despite that, crowds of people desperately trying to get through the gate continued to gather. It shows how scared people were that they were prepared to take such risks to get out of Kabul.

“The scariest moment came the next day. We were sitting on the bus and saw the police and lots of other people suddenly start running and shouting another attack was about to happen.

“We thought there was about to be another big explosion and that was our last moment alive. It turned out it was just a plan to enable the Taliban to clear and occupy the gate.

“The second night, a soldier said he was coming to escort us but then a security alert meant we could not get through. We were literally inches from freedom.”

The family eventually had to go into hiding in Mazar-i-Sharif, north of Kabul, where they spent 23 days moving between different accommodation, waiting for flights being arranged by the American charity Uplift Afghanistan Fund.

Frishta takes up the story of those 23 days: “Taliban soldiers would come into the hotels and take people away. We never knew if they were coming for us and changed location eight or nine times to avoid them.

“We are Hazara so the fear was constant. Farzana and I working in women and girls’ education was also a big problem.

“Lots of men bore a grudge and were ready to take revenge by telling the Taliban we had worked with foreigners and were un-Islamic.

“We did not even feel safe when we were finally on the plane taking us out of Afghanistan to Qatar. The Taliban came inside the plane to check everyone’s documents. I was so scared we’d get sent back. It was only when the plane finally took off we dared to think ‘Maybe this is the moment we escape’.

“We leave with mixed emotions because you worry about your country and the people left behind. I married my husband five years ago and we had built a family home and furnished it with new things. We’ve had to leave everything behind.

“We have heard that Scotland is cold and rainy… but it is peaceful. We’d rather deal with the rain in Scotland than the Taliban in Afghanistan.”

Frishta and Farzana will continue to help the Linda Norgrove Foundation to support people in Afghanistan. 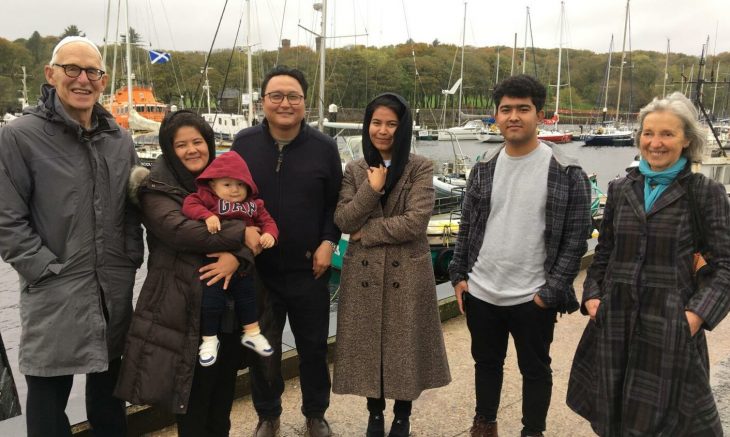 Frishta with baby Kia, her husband Murtaza, Farzana and their brother Zaker pictured with John and Lorna Norgrove in Stornoway.

The Foundation launched a campaign to evacuate the family in August, receiving wide backing from our supporters, the public and politicians, and achieving substantial publicity in the media. This helped draw the attention of those who might be able to help the family.

John Norgrove said: “It was one of the best phone calls of my life when we finally heard they’d got out.

“That 46 hours they were at Kabul airport was traumatic. We were communicating using voice notes on WhatsApp, and in their messages all you could hear was constant gunfire in the background. You realised what a dangerous position they were in.

“We are grateful for the support of the Scottish Secretary, the Foreign Secretary and everyone else who has combined to finally get our staff and their family to safety in Scotland.

“We’re particularly grateful to the US charity, the Uplift Afghanistan Fund, as they managed to get them out of the country when every other avenue had drawn a blank.”

Scottish Secretary Alister Jack said: “I want to thank all of those in the UK, the US, Afghanistan and Qatar who worked so tirelessly to make their safe passage possible. I’m sure that the sisters and their family will be warmly welcomed in Scotland, and we will do all we can to support them in building a new, secure life in the UK.”