Lorna and I have been fully occupied over the past month with fund raising.

Last Saturday was the Foundation’s art auction, the culmination of six weeks of fairly continuous effort and thought: would we have enough donated art? Would enough people come? Would too many people come? Would donated art be sold for bargain basement prices, publicly devaluing the efforts of the artists who had given the works?

On the day, we had enough people but not too many, good prices generally and, most importantly, a very good feeling among a good crowd. We expected to gross around £5,000 but we actually took in over £14,000 if donations are included. A really tremendous result all round. We can do some serious good with money like this.

On Tuesday, Lorna and I together with our other Lewis trustee Brian Hindson started off the Lews Castle College ‘Meet it or Beat it’ challenge. Organised by the students’ union, this involves a succession of sponsored cyclists on several exercise bikes trying to cycle further in two days than Linda managed when she cycled across the USA in 1994.

Our daughter Sofie and her husband Matt are arranging a general auction in their area (near Oban) towards the end of the month and, so far, they’ve managed to assemble a wide variety of items, ranging from bottles of malt all the way to weekend breaks for two in a top hotel. In mid May, they’ve organised a dance in their village hall in Kilchrenan which we’ll go down for.

An intrepid 70-year-old is to swim 800 metres across the Sound of Pabbay – and training by swimming in the Atlantic nearly every day throughout the winter.

Mid July sees the Linda Challenge 2011 when Rhoda Bamsey will attempt to run six marathons in six days throughout the length of the Outer Hebrides, supported by our resident cyclists – trustee Brian Hindson and webmaster John Conway.

At the end of July we have a sponsored tractor run from Ness at the northern tip of Lewis to Leverburgh at the southern end of Harris. Thirty tractors booked already. I’ve owned a Massey Ferguson 35 for about 30 years now and my current faithful is undergoing a much needed renovation in advance of the occasion.

Friends are undertaking their own fundraisers:

I was a lazy youth – university looked a cushier prospect than working in a factory in Birmingham. I packed in my first job as a graduate after six months to follow Lorna up to Scotland and become a part-time barman. After the India hippy trail I worked in the extreme north of Scotland as an engineer rather than pursue a career in a proper job. Then I landed a job with the Western Isles Council in Stornoway which, at the time, appeared to be as close to retirement that you could get while remaining in employment. Eventually transferring to the water authority, I was lucky enough to arrange for early retirement on a full pension at age 50. 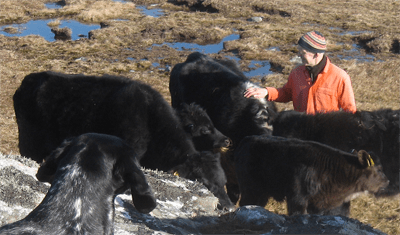 John with some recently born calves.

Then I started working for myself part-time as a consultant and ended up busier than ever. This work had reduced considerably last year and I was starting to take it a bit easier when Linda was kidnapped and we started this charity.

Now I’ve no time again. I’ve given up and finally retired from retiring.

But it’s clear to me now, even though it’s taken a lifetime to come to this conclusion. You don’t retire, or take it easy even if this is not your nature. We can so easily focus on the task or the material possession in front of us at the time, thinking that this will make life easier/more comfortable/change us as a person. It doesn’t happen; there are no plateaus, just the uphill. Journey, not destination.

What about a comfortable retirement, I hear you say. Open your eyes and look at old people. The day is approaching for you when getting up in the middle of the night for a pee will be as hard as climbing Kilimanjaro would be just now. It sounds like a joke but it’s closer to reality than you’re admitting.

« Caught out by the small things
Dying for an education »