As part of the Foundation’s 10k event, Eoin MacDonald-Nethercott organised a race on Antarctica, where he is based at the Concordia Research Station. But at minus 55 degrees centigrade, running just 500 metres was an achievement. Here are some extracts from Eoin’s personal blog.

12 September
I ran outside for the first time in a long time today – 250 metres to a point I fixed by GPS, and back. And I only just made it.

I had heard that the Linda Norgrove Foundation is organising a fun run in October – she was an old university friend of mine and I thought we could try something here in support. I’m hoping to persuade most of the crew to do it, and I’ve got some takers already. I’ve been waiting for a warming event to get out and try, to see how feasible it is. And when I got up today and found there were clouds across the horizon, today was definitely the day. 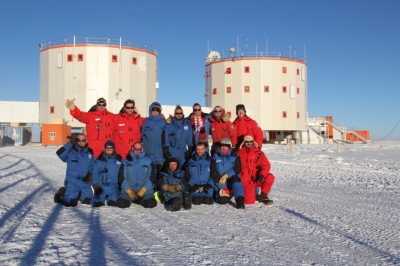 to see just how far we can run at 3,200 metres above sea level with an atmospheric pressure of 650 millibars in soft snow at minus 55c, Andrea Ballarini and I tried to run 500 metres.

And we made it, just.  Absolutely fighting for breath at the end of it. I think that was pretty much my limit, I thought my chest would explode.

10 October
Many of us have been training together in the gym for months, and this was our only time to go head to head – there was certain to be some pretty earnest competitiveness.

Although I’ve put everyone through some hard exercise inside, I had no certain idea what would happen when we raced outside. So, we played it safe. There is just no physical way you could run 10k here. The best thing would be to do a short, fast race. That way we stay close to the base, and we stay within sight of everybody else the whole way through.

I got out a GPS and wandered round the station looking for a good course, and I found it’s 250 metres from the base up to the summer camp. Perfect. Run up, round a St Andrew’s flag I planted up there and back to the start line.

the plan, but I wondered how on earth I could persuade anyone to do this. It turned out that I didn’t need any persuasion. I asked, and everyone agreed.

I was pretty amazed, and really glad, to discover that everyone in our frequently fractious crew was so ready to turn out, just because I asked them to.

Of course I played it a bit smart. I know well who would like to run, who would be willing to run, and who would definitely not. So I approached those guys and straight off asked them to help me organise it – a safety guy, photographer, filmer, race starter/timer. Everyone was doing something they were happy to do.

So we had 10 runners and four support. You know, I think it might be the first time of the whole year that all 14 of us were outside joining in something together. Remarkably, I think everyone enjoyed themselves.

You never saw people so exhausted after taking two and a half minutes to run 500 metres.

« No accounting for gains or loss
Afghanistan can ambush you »