I came to help women and girls but Jalalabad seemed to be a city of men and boys. Even the vegetable sellers were men. There were boys in the street, flying kites and playing cricket with homemade tin bats. Boys at work, helping their fathers in the market, school boys hanging out in groups, laughing and pushing each other around as children do everywhere.

It seems like there will be many wonderful photo ops but the security guards do not allow us to stop for photos. There has been a terrible suicide bombing at the Jalalabad branch of Kabul Bank. The city is tense and every day that I was there, there was another security incident. They would not stop even to let me take a photo of the truly giant cauliflowers available for sale everywhere. When I arrived at the office where Linda used to work, it was still all men. 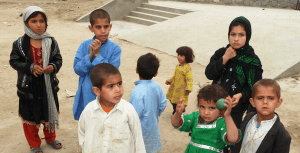 Finally, I was taken to the ‘gender’ group and it was here that I finally had a chance to meet Zeba, Linda’s good friend and colleague who will help us continue Linda’s work. Zeba and Mina, another gender activity leader, are expecting me, they are excited about helping these women and they rushed me right out the door to visit the ‘Marastoon Nangarhar’. Marastoon means ‘place of assistance’ in the Pashto language. Nangarhar is the province it is located in. There is only one marastoon in each province of Afghanistan. Despite the poor conditions, there is a long waiting list. There are not many places of refuge in this harsh land.

We are poor and uneducated and do not even know what to dream for. We do not know what is possible. 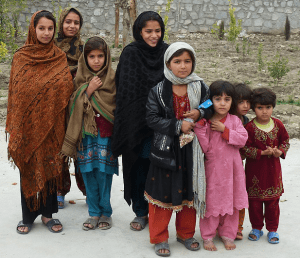 The marastoon is only a few minutes down the road and I am delighted as the children come running dressed in brightly colored clothes. I am allowed to take photos but the children are shy. There are 21 women living here. They each care for four to eight children. Some are orphans and some are their own children.

The women are given a small stipend every month to buy food. Everyone receives the same regardless of how many children they must feed. The children, boys and girls, can live at the home until they are 18 and then must leave to find their own way.

The girls will likely be married to older men who have lost their first wives or who want to have more children. I met one young bride-to-be who was 15 years old. She was to be married next week. She was frightened but all the women there thought it was a wonderful opportunity for her. It might be a hard life but someone would take care of her.

The boys, if they are lucky, will be taken in by a merchant and learn a trade. Another grim possibility is that they will be recruited by extremists and groomed to be suicide bombers. It is an eventuality we all want to avoid.

I am given a tour of the facility. The building is new. On the outside, they have planted fruit trees and a vegetable garden has been started. In February the trees are still bare and there is mud everywhere but it is neat and they are hopeful that the harvest will be good.

Every woman is given two rooms and a bathroom for herself and her children. The rooms are thinly carpeted and furnished with a few mats for sleeping. It is cold but I see no evidence of any blankets or quilts. There are no cupboards or closets. There is electricity but there is rarely money to pay the bill. There is running water but no electricity to pump the water to the holding tank so water is carried in from an outside pump. There is no television, no books and no toys of any kind. I see one little girl in a ragged tunic holding a small green ball. 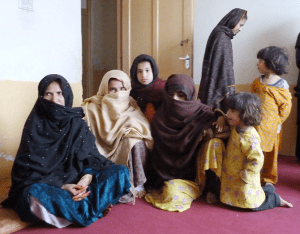 Finally, we meet in one of the rooms. I want to hear the women speak for themselves but it is the male director who does most of the talking. They need a computer, they want skill training, they need medical help for the children. Bread is expensive. I am surprised when they tell me they are bored. They need activities. They want to sew, to knit, to spin wool, to bake bread. Some of them want to learn to read, one young girl dreams of becoming a midwife. They all want their children to learn the computer. ‘It is the future,’ they say.

I ask them, ‘Is there one thing we can do right now to make your life better?’ One of the women answered, ‘We will be grateful for anything you can give us. We are poor and uneducated and do not even know what to dream for. We do not know what is possible.’ They broke my heart. I want everything for them and now it will be up to the Foundation, Zeba and me to help make their lives better. I hope to continue this story in a week or two with a happy beginning. With your help, we will make something good happen here.

« Dealing with errors of judgment
Caught out by the small things »

Marianne Parente is helping the Foundation to identify and implement its grant projects in Afghanistan.